Skip to content
Today it’s about some brands of watches and watch movements, the history of which is almost unknown, but which are all related. The linchpin here is the ORA brand. So, let’s start with it!
This movement was my first encounter with the ORA brand:

Unfortunately, I didn’t have an entire watch, just a dial with the words SONIC and ANCRE A G.

The mark Co 234 next to the escape wheel made it possible to identify the movement as an ORA 234, with the help of the Flume watch movement identifier from 1962. At first glance, it is a good quality movement with a diameter of 11 1/2´´´ (French lines, approx. 25.9 mm), small second, hidden ratchet and 17 jewels. The fact is that it looks a bit better than it is, as it is a simple pin lever movement in pillar construction. By the way, the inscription ANCRE A G on the dial means Ancre à Goupille, i.e. pin lever!

Fine, but which manufacturer is behind the ORA brand? A look at the Mikrolisk brand directory provides seven possible manufacturers. Three from Switzerland, two from Germany and two from Italy. The most likely seemed to me to be the Swiss manufacturer Era Watch Co. / C. Ruefli-Flury & Cie, since according to Mikrolisk he also made movements. There was no SWISS MADE on the movement, nor on the dial. That puzzled me, but initially I stuck to the theory of the Swiss manufacturer.

Much later, a member of the German watch forum Uhrforum presented a partially transparent cocktail watch from the Modina brand and asked for the movement to be identified.

The movement could be identified as ORA 235. With 10 1/2´´´ it’s a bit smaller than the ORA 234, but also a pin lever movement with 17 jewels. It has a pseudo screw balance, so the ‘screws’ cannot be used to regulate the movement! This movement is also marked next to the anchor, here with Co 235: 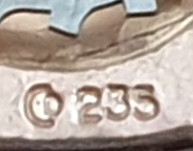 What does the Co stand for? Hardly for Company, that would be banal. O for ORA would be plausible, but the C? A search in about 20 movement identifier books, catalogs and directories provided the following findings:

Again, on the Modina watch with the ORA 235, neither the movement nor the dial has an inscription SWISS MADE. So maybe not a Swiss manufacturer after all? I became curious again and started to do more research. In a young Italian watch forum called AISOR, I came across this advertisement from the Società d’Orologeria ORA di Vogt & Co from Como in Italy:

The company was also listed twice with the ORA brand at Mikrolisk. The ad said that they were producing fancy watches of the Roskopf type in large quantities. This matches the cocktail watch and the pin lever movements since Roskopf type watches usually have pin levers. A first indication of an Italian manufacturer of the ORA movements, but unfortunately no proof yet!

During the same research, I also found another connection between OC, ORA and Italy in the form of a watch case back, without any information about the watch itself:

It’s difficult to read what’s written on the case back, but it says OC CAL R7. On the inside we can read ORA and MADE IN ITALY. Okay, so OC = ORA, and ORA comes from Italy! I suspect that OC stands for ORA and Como.

The final proof came from an advertisement from the Società d’Orologeria ORA di Vogt & Co in the Indicateur Davoine, a Swiss (!) Directory of watch manufacturers, from 1960:

The movements ORA 234 and 235 are shown in this ad! The company ran the same ad every year from 1960 to 1969 in the Indicateur Davoine. And before that these two can be found:

In 1977 there was no longer an advertisement in the Indicateur Davoine, but at least an indication of the existence of the company:

In a list of taxpayers published by the Italian tax authorities in 1930, a watchmaker named Oscar Vogt was recorded in Como. He or his descendants probably have something to do with the Società d’Orologeria ORA di Vogt & Co.

In the above-mentioned movement identifiers and catalogs, I could find the following movements that are listed under ORA, CO or OC:

There were small modifications of these movements, which can be found both in the OC 71 and OC 120.
– Modified setting lever spring
– Area around the winding stem: made of metal or plastic
– Dial side: U-shaped cutout for anchor or no cutout
– Balance cock with two curved and one straight side or balance cock with one curved and two straight sides
(4) No complete movements, only spare parts found

Verified in the table above means that I have seen real movements at least on pictures. Some movements are listed with many different names, but it should always be the same movements. With the 13R, OC 32, and ORA 13´´´ I am not sure if they really exist, because the are only recorded in a few directories.

Did ORA make these movements itself? Unfortunately, I do not know! Manufacturers usually use to advertise it when they make their own movements. The ORA movements often have similarities to pin anchor movements of Swiss manufacturers, such as Lapanouse/Rego. So far, I have not really been able to assign an ORA movement to a Swiss manufacturer. After all, the movements seem to be exclusive to ORA. The entire movements or individual parts may have been sourced from Switzerland. The Italian city Como is only 5 km away from the Swiss border!

So far, I have found the following watch brands in which ORA movements are used:

24 different brands and there are probably more!

In addition to the OC logo, crown and wing motifs (TANIVAS, ZE IH) appear again and again on the dials. The wing motif can also often be seen on the case back of various ORA watches.

I suspect that ORA completely built the watches of most of these brands itself, possibly on behalf of other companies. At least the watches with the OC brand with caliber information on the case back should be from ORA. However, E. R. C. watches are also available with movements made by Cattin.

Let’s stay with the watch brands LING and LINGS, respectively. With them, the difference between appearance and being is often particularly large. On the dial we see 21 PRIX, which is supposed to suggest 21 jewels to the inexperienced buyer. In fact, most of these movements don’t have a single jewel. And below the 6 we can read SYSTEM, SWISS MODEL or SWISS TYPE, exactly where SWISS or SWISS MADE is often found on Swiss watches:

A special highlight are the pseudo chronographs with the OC 120 and OC 71.

They have two push buttons with which the central second hand can be stopped and started again. Unfortunately, when you stop, the balance is stopped and therefore the whole movement stops! They also have a pseudo-totalizer at 9 that runs counterclockwise, which doesn’t make any sense. It rotates by 360 degrees every four hours. There are also variants with a second pseudo-totalizer at 3 that rotates counterclockwise every seven hours. Both are driven by the hour wheel. At first glance, the watch looks like a real chronograph, but unfortunately it has nothing to do with it!

To make matters worse, Lings watches were often offered as so-called Autobahngold (German for ‘highway gold‘) (see info box below). Unfortunately, I do not know whether ORA has already produced these watches with the intention of fraud or whether buyers have modified the watches accordingly.

Caution Autobahngold ('Highway Gold')
In the 1960s and 70s the Germans and other Europeans went on vacation in the south in large numbers, especially to Italy. They were often approached by locals at motorway service stations or train stations and asked for help in an alleged emergency. In exchange for some money or as a deposit, they offered vacationers ‘real’ gold jewelry, including bracelets, necklaces, and watches. It was always inferior goods that were at most thinly gilded. In addition to fantasy stamps, which should remind of real gold stamps, real gold stamps were also often hallmarked.

At least in the latter case, they are gold counterfeits that have been turned to good faith holidaymakers.

Some people may still think today that they have a little treasure at home!

So, if you have a Lings watch with gold stamps on the case back, you can be sure to have a fake in front of you!

If one of my readers has more information about the Società d’Orologeria ORA di Vogt & Co from Como in Italy, I would be happy to hear from you!

One thought on “ORA, OC, Lings, and 20+ other Mysterious Watch Brands”