Actually this should be an article about automatic movements of the Japanese watch manufacturer Ricoh. However, it soon became apparent that the history of Ricoh’s watch division is so exciting that it deserves its own contribution. Therefore, the Japanese company Takano will be in the limelight here, without which there would probably have been no mechanical watch movements made by Ricoh! 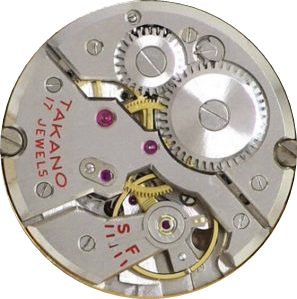 The history of Ricoh begins in 1936 with the founding of Riken Kankoshi Co. Ltd., which became the Ricoh Co. Ltd. in 1963, with some intermediate stations. A multinational corporation which is still active today. The origins of the watch division of Ricoh but come from the Japanese Takano Seimitsu Kogyo Co., which was founded in 1938 and whose history reaches back to 1899.

Founded by Takano Kotaro in Nagoya in 1899 as Takano Clock Manufacturing, the company initially produced wall clocks. 1913 a second company was founded, Takano Metal Manufacturing, which produced table clocks made of metal.

After the death of the founder, his son merged the two companies in 1924 and produced precision instruments for the Japanese military. Due to the increasing need of the military, the production of watches was discontinued in 1936. In 1956, after the end of the Korean War, business with the military came to a standstill and Takano began producing wristwatches. The production started in February 1957, the first watches were sold in September 1957.

And here it gets interesting: these first Takano watches do not have a self-developed movement, not even one from Japan or Switzerland, but a Durowe from Germany! The movement in the Takano Precision is a hand-wound, center-second, 17 jewels Durowe 522 with a diameter of 11 1/2´´´ (French lines). In the Takano Precision Super it is a Durowe 522 with 19 jewels, in the Takano Precision Superior Deluxe it has 23 jewels.
From 1959 Takano has also used the slightly smaller Durowe 422 with 10 1/2´´´ and 17 jewels as caliber Takano 123 in rectangular watches. Incidentally, the Durowe 422 is largely identical to the Enicar 410, so it was probably taken over by Durowe from Enicar.

I could not find a reliable source whether Takano has only sourced the movements from Durowe or if there was a further cooperation with the company Laco (Lacher & Co), the watch manufacturer belonging to Durowe. But there is some information on the Internet that suggests that there was a cooperation between Takano and Laco.

Also in 1957 there was a cooperation between Takano and the American watch manufacturer Hamilton Watch Co. for the production of Hamilton watches in Japan.

In October 1959 Takano brought his first watch on the market, which had an in-house developed movement. These watches were branded as Chateau, Takano Chateau, Chateau Nouvel, Chateau Deluxe, Chateau Frontier and Chateau Calendar. With a height of 3.5 mm, the watch was marketed as the thinnest Japanese wristwatch.

There were also variants of the movement with date indication, the caliber 524 with 19 jewels, the 534 with 21 jewels and the 544 with 23 jewels. Here we have a Chateau Calendar with 21 jewels:

There were also women’s watches from Takano, here’s one of the brand Opal:

Others are difficult to recognize because they only carry the brand name Sabrina or Etoile on the dial side:

Only the Takano T logo on the case back and the inscription of the movement reveal the origin:

The movement in the Sabrina is a Hamilton 911. I could not yet identify the one in the Etoile. Maybe it’s from a Japanese manufacturer like Seiko, Citizen or Orient …

Economically, Takano was not doing well. Sales were sluggish, facing strong competitors in the Japanese market, such as Seiko or Citizen. Finally, in September 1959, the Ise-wan typhoon caused damage to Takano of 110 million yen – about 5 million euros today – and a one-month loss of production. In the summer of 1961, the company was finally insolvent.

From the transitional period between Takano and Ricoh, there are watches that carry the brand Chateau, but whose Takano 524 movement is marked with Ricoh:

This variant of the Takano movement is likely to be the first Ricoh movement in a wristwatch. This is where the history of Takano as a manufacturer of wristwatches ends after almost five years, and that of Ricoh’s watch division begins! Due to its short history as a watchmaker, Takano is sometimes referred to as a phantom watchmaker.

At least the story of the brand name Takano Chateau goes a bit further. In 1998, on the occasion of the 60th anniversary of Takano, the Ricoh Elemex Corp. issued the Takano Chateau 1960 with a Swiss ETA 2801-2 manual winding movement, with 17 jewels and the caliber designation 7120:

Again in 2018 for the 80th anniversary, there was a reissue of a Takano with a Miyota 9039 automatic movement with the designation 7150 and 24 jewels:

Let’s be surprised if there will be another anniversary watch in 2028 or 2038!

Finally, a list of all Takano watch movements I could find so far. By the way, all Takano movements from the 1950s and 1960s have a balance which beats at a beat rate of 18,000 bph (beats per hour).

Sources about the history of Ricoh and Takano: 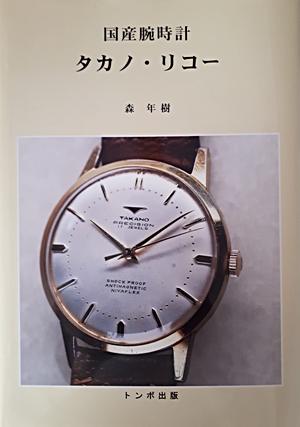