Skip to content
Guba in Ellmendingen near Pforzheim was a German manufacturer of watch movements about which hardly anything is known. Here we take a look at the little that is known.

The history of Guba Uhrenrohwerke (watch movements) began in 1924, when the goldsmith Hermann Friedrich Bauer and his sons founded a company in Pforzheim to manufacture gold watch straps, followed a little later by gold watch cases.

The History of Guba

The company is successful, so that soon watch movements and entire watches are also manufactured. In the course of time, further subsidiaries are added. The founder of the company dies already in 1940, his three sons continue to run the company. After the Second World War, the company was painstakingly rebuilt. In 1949, the three brothers finally decided to split up the company. The eldest son Robert, together with his daughter, took over Hermann Friedrich Bauer OHG in Pforzheim, his brother Eugen Bauer took over the factory in Weiler under the name Uhrenfabrik Nostra, and the third son, Gustav Bauer, took over the movement production in Ellmendingen, which then traded under the name Guba Uhrenrohwerke.

Unfortunately, I could not find out anything about the size of the company, but a postcard of Ellmendingen from 1961 shows a quite stately company building. Note the misspelled town name on the postcard!

It is not known whether Guba Uhrenrohwerke produced only movements or also complete watches. At least under the name Guba none seem to exist, and other brand names were probably not registered by Gustav Bauer.

Guba movements can be found in watches of the following brands, among others:

Unfortunately, almost nothing about the Guba company can be found in the relevant trade journals and archives. So far, I have only been able to find one advertisement.

Gustav Bauer dies in 1955 at the age of only 51. His son Kurt Bauer continues to run the company.

Unfortunately, it is not known how long the company continued to manufacture movements. Traces of Guba can still be found in some patent applications for watch straps in various countries, including Germany, Switzerland and the USA. The last patents were applied for around 1969, but some were not granted until the early 1970s. 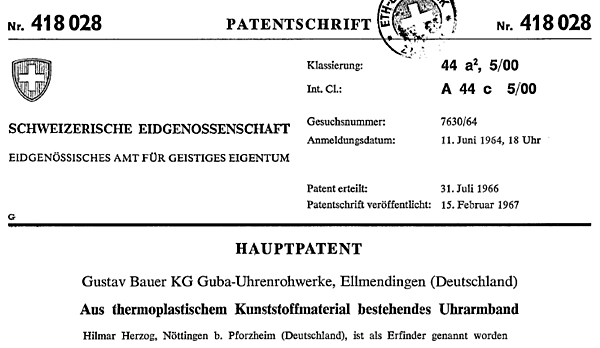 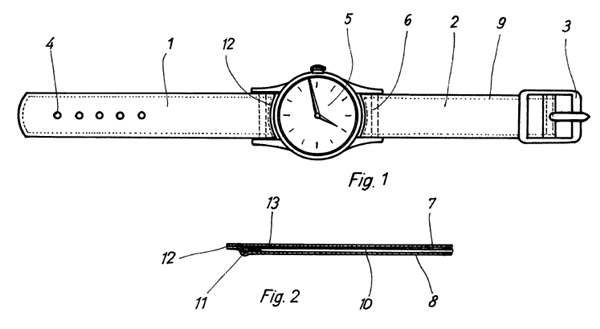 And an excerpt from U.S. patent US3362595, simply titled Watchband: 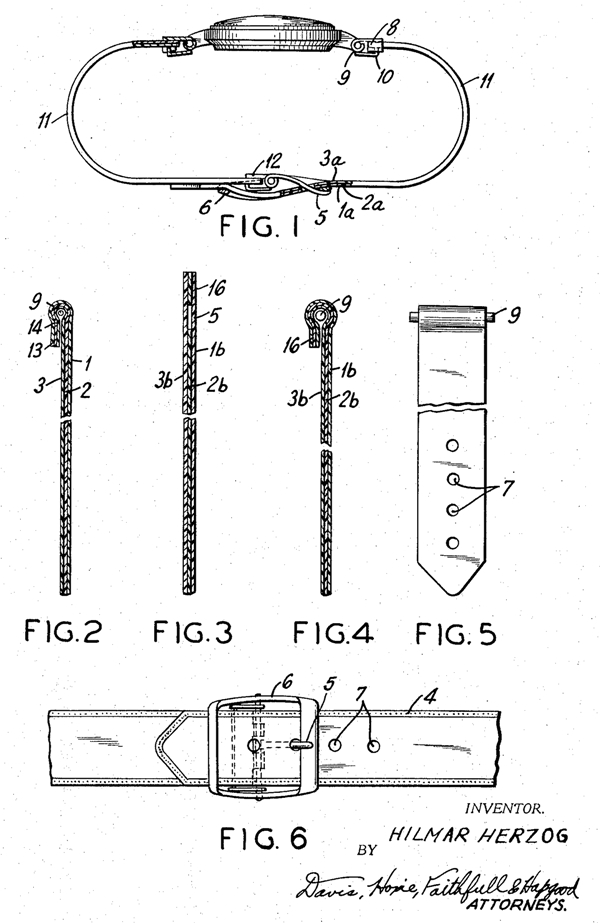 The Watch Movements of Guba

In the course of time, Guba built a total of seven different basic forms of movements. Some of them were available in different versions, for example with small second or center second or with or without date. All movements have a Swiss pallet lever escapement, so Guba never seems to have built cheaper pin lever movements.

This movement is technically largely identical to the H. F. Bauer 8 3/4´´´ of Gustav Bauer’s father’s company. It is therefore probably the oldest Guba movement and was primarily intended for ladies’ watches due to its small diameter. The movement itself bears no indication of its origin.

This small form movement is labeled differently in different movement finders. The specimen shown here can be identified by the hallmark G25 on the dial side.

Another small form movement for ladies’ watches with a slightly different form factor than the Guba 25. This one is also stamped with the caliber designation G 500 on the dial side.

This is a somewhat modernized version of the Guba 8 3/4´´´ old shown above. It exists with indirectly driven center second (SC = Seconde Centrale) and with small second. Unfortunately, I have never seen the variant with center second.

This movement with a diameter of 10 1/2´´´ (approx. 23.7 mm) is designed for men’s watches. This movement is also available with indirect center second (SC) and with small second. The second picture shows the version with center second, recognizable by the wheel above the gear train bridge, which is mounted on the third wheel and turns a second pinion in the center of the movement.

The following picture shows a watch of the brand ECLY with a Guba 1050 SC from around 1950. With a diameter of only 30.4 mm, this was a decent men’s watch at that time. ECLY was a brand of Eugen Jäckle from Pforzheim.

Probably the first Guba movement with a direct driven center second. With its pillar construction, the click on the dial side and a rocking bar winding mechanism, the movement reminds of many pin lever movements, yet it has got a pallet lever escapement.

This movement is available in two diameters (10 1/2 and 11 1/2”) and without and with date (CLD). The larger version is also available with automatic (AUT), with or without date (CLD). They all have in common the direct center second.

Unfortunately, I can only show two real movements without date and automatic. Both are stamped with G 1200 on the dial side, on the first movement you can also see the Guba logo with the anchor.

The second movement shows a special feature. The gear train bridge says that it has 27 jewels. If you compare the pictures of the first movement (17 jewels) with those of the second, you see three more cap jewels on the second movement, two on the dial side, one on the bridge side. Furthermore, on the dial side, there’s a “latch” of four jewels, which are only for decoration, i.e., they have no function. That makes a total of 17 + 3+ 4 = 24 jewels. But where are the remaining three hidden? I couldn’t find them when I disassembled the movement…

A picture of the automatic variant can be found in the Flume Werksucher (movement identifier) K2 from 1962:

Who the actual manufacturer of the module was is not clear. Some assign it to AHO, but this is not proven in my opinion. Probably, the construction is based on the American patent US2810255 of Gérard A. Langel, a Frenchman, who also developed the famous Ultra Superautomatic (see Ultra – Watches and Movements from France). The patent mentioned was already applied for in 1953, but only granted in 1957!

Langel was working for the United States Time Corporation at the time, which had many names throughout its history, including Ingersoll, Waterbury, and Timex. So this company may have manufactured and sold the Robot-Automatic modules.

If any of my readers has further information on the history of Guba, I would greatly appreciate a message!