A long way to the first tangible R150

First copies of the new R150 should already be available at the end of 2016. It then took a little while until delivery really started in the third quarter of 2017. Since then, I have been looking for watch manufacturers who use this movement.

The first manufacturer I found was the American company Shinola, which used the R150 in the Lake Erie Monster Limited Edition. Unfortunately, at a price that did not speak in favor of buying the watch primarily because of the movement. Then I found a Kickstarter campaign of the Swiss fashion label EINSTOFFEN, in which the watch model Altenalptürm was offered with a Ronda R150. I ordered an Altenalptürm watch, and was disappointed when they sent me a watch with a Sellita SW-200 instead of a Ronda R150. So I sent it back. In the meantime I had already written to Ronda in Switzerland and their representative in Germany, Ermano, and asked if I could buy or inspect an R150 somewhere. Both did not feel like answering. Even the big watch furniture dealers Boley and Flume could only tell me that the Ronda R150 is not (yet) available.
Then, in late March 2018, a ray of hope: I stumbled over the Ukrainian watch manufacturer Kleynod. He announced on his website that he now equips all automatic watches with the Ronda R150. About two weeks later she was with me, the Kleynod K 348-510:

With a diameter of 42 mm and a lug width of 22 mm it’s not a small watch. But we we are going to talk about the movement here, not about the watch!

Technical data of the R150

A first look inside

Let’s start with a first look at the open back of the watch: 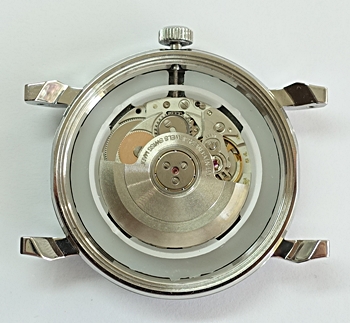 There is a lot of space between the movement and the edge of the housing. Relatively small movements in large cases inevitably lead to the fact that the date is not near the edge of the dial, but relatively far inside. Here, however, the manufacturer of the watch has managed it quite well by optically positioning the date on a circle located further inside.

By pressing the setting lever push button, the crown including the winding stem can be removed. The movement can be taken out of the case to the rear: 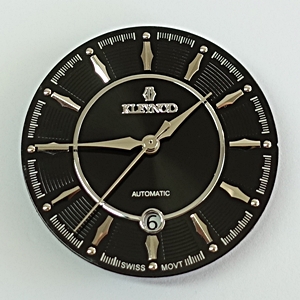 After removing the hands and the dial, we have the movement in front of us: 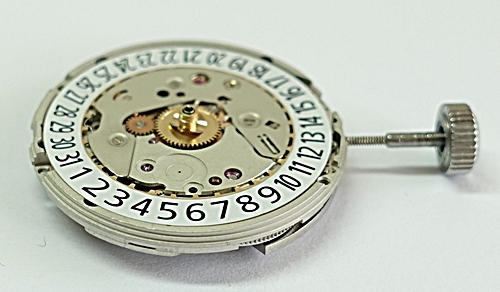 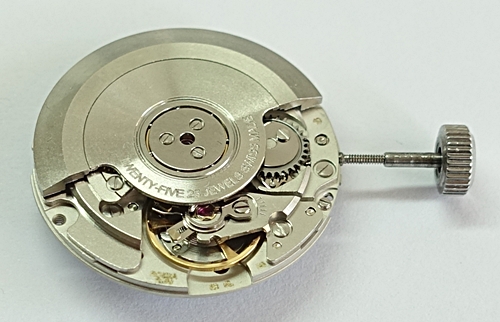 You can see immediately that there is no decoration on the movement, like perlage or geneva stripes.  The engraving “TWENTY-FIVE 25 JEWELS …” on the rotor looks rather rough and the laser markings next to the balance are barely legible. Not a beauty, but pure technology instead.

Now let’s start to dismantle the movement. The ball-bearing rotor is held by three small screws. Underneath you can see a rather small automatic bridge, which looks almost like a banana. As with many more modern movements, such as the Miyota 9015, the automatic unit is integrated into the main plate, and not an extra modul such as in the ETA 2824-2. 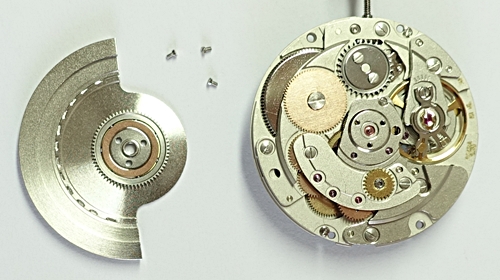 On the top side of the automatic bridge is a drive wheel (gold colored), which is directly driven by the gear rim of the rotor. It is only plugged in there and is held in place by the inner ring of the rotor. So be careful that this part does not suddenly disappear when the rotor is removed! 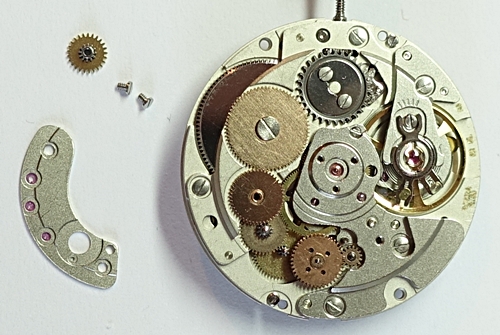 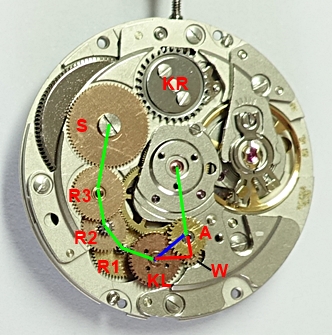 The Ronda R150 has a bidirectional winding automatic. Therefore, there must be a mechanism that causes the wheels to rotate in the same direction at a certain point in the automatic gear train, regardless of the direction in which the rotor actually rotates.

The crown wheel KR serves to wind the movement manually. Since the automatic rotates the ratchet wheel, the crown wheel would actually rotate as well. However, it can slide a little bit, so that it can avoid the reverse rotation and simply slip through.

So far, so good, but how exactly does it work with the pawl winding wheel and the reverser wheel? 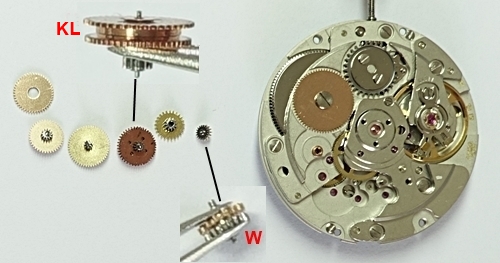 The pawl winding wheel KL consists of two superimposed wheels and a pinion. Inside is a construction of small pawls, which ensures that the pinion only rotates jointly when at least one of the two wheels rotates to the right (seen from above).

So if we manage that the two different directions of rotation of the rotor via the drive wheel A cause one of the two wheels of the pawl winding wheel to rotate to the right, then the pinion will always rotate to the right regardless of the direction of rotation of the rotor. Accordingly, the reduction wheel R1 driven by this pinion will also always rotate in the same direction. Here, the reverser wheel W comes into play. It consists of two superimposed wheels that are rigidly connected (see picture above).

The following picture shows the interaction of these components:

Now it’s quickly explained w hat happens when the rotor rotates to the right instead of the left:

Beneath the barrel bridge and the train wheel bridge 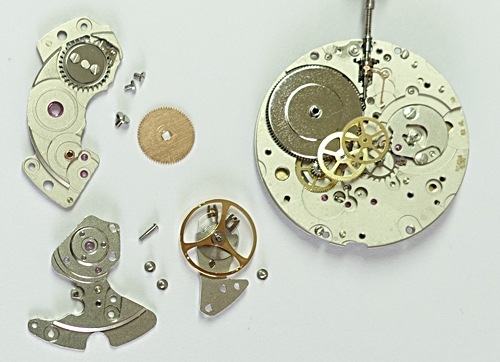 On the barrel bridge you can see two specific features of this movement:

Under the bridges, a very classic structure comes to light, which holds no surprises: 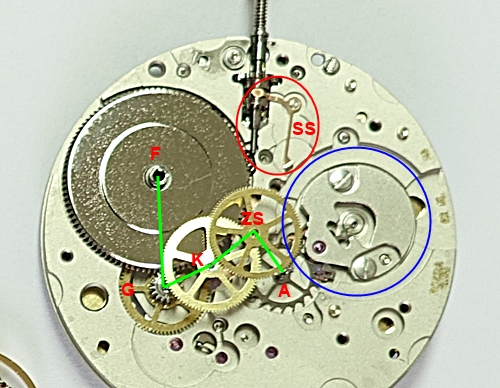 The power transmission goes from the barrel F over the great wheel G, the third wheel K to the directly driven second wheel ZS, and from there to the escape wheel A.

SS indicates the stop-second hacking mechanism. When the crown is fully pulled, the small lever presses on the balance wheel (indicated by the blue circle), so the movement stops while the hands are being set.

Except for the pallet bridge and the pallet fork all parts are now taken away from the bridge side: 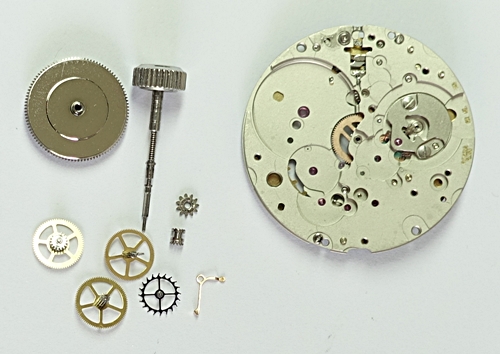 Let’s continue with the dial side and remove the date indicator maintaining plate first. 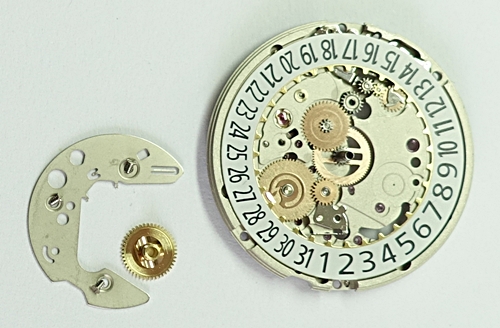 Very nicely done: there are no small springs that say goodbye when the date indicator maintaining plate is lifted off. 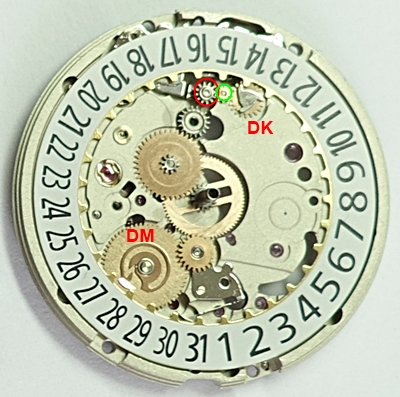 Here all the components of the dial side are removed, except for the setting lever spring and the underlying parts:

Around the setting lever spring, it looks rather confusing at first: 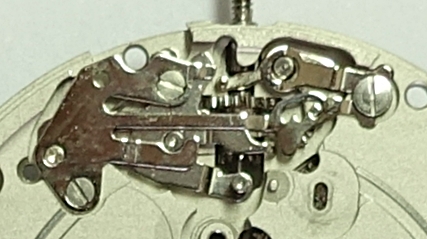 If we remove the setting lever spring, it’s getting easier. Fortunately, there is no spring that could fly away. Instead, all spring elements have been integrated into the corresponding components. 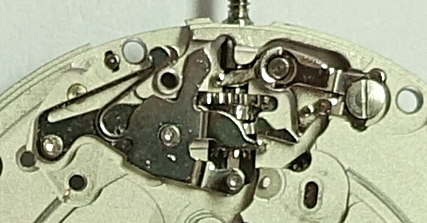 On the timing machine

So much for the theory, but how well does the movement work in practice? There is of course no long-term experience yet, since the movement is still very new.

On the timing machine, the values are very stable in all positions, but they vary considerably depending on the position. In my tests, the maximum deviation between the positions was 20 seconds per day. This is within the specification of the manufacturer (maximum 30 s/d).
The average rate over all six positions is about +8.5 seconds per day. Not record-breaking, but fine.

The amplitude was between 290 ° in the horizontal positions (dial up and dial down) and about 270 ° in the hanging positions (crown left, right, up, down). And the beat error was between 0.0 and 0.1 ms in all positions. So there is nothing to moan about.

The R150 is certainly an important building block for Ronda to re-enter the market for mechanical watch movements. Technically, it offers solid home made work without special refinements. One or the other production step may need to be optimized a bit. For example, I found some oil splashes on and around the pallet fork, as well as a blob of oil around the setting lever push button.

A watch movement that could be well received by smaller watch manufacturers in particular, if they are looking for a Swiss Made movement. And if Ronda manages to produce large enough quantities of good quality at a good price. The movement is not fully compatible with the ETA 2824-2 due to the slightly different height (4.4 vs. 4.6 mm). Both movements have the same stem mounting height,  therefore it is possible to create watch cases that fit both the Ronda R150 and the ETA 2824-2. Time will tell if Ronda will succeed with the R150.