Skip to content
Little is known about Crettiez, a French manufacturer of movements and watches. And the little that is known, unfortunately, has a sad background. But let’s start with the story from the beginning. 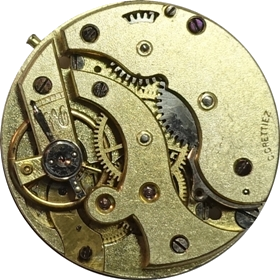 In 1862, Claude Crettiez, born in 1842, founded a watch parts manufacturing company in Arâches-la-Frase in Haute-Savoie. In 1872, the company moved to Cluses, just a few kilometers from Arâches. Haute-Savoie borders directly on Switzerland and at that time attracted many small watchmaking companies that exported their products to Switzerland. At that time, Switzerland alone was not able to satisfy the explosive global demand for pocket watches.

Crettiez was not just one of many parts manufacturers, but made its own movements and also entire watches, including chronometers, watches with particularly high accuracy. Unfortunately, even then, the name Crettiez was known only to professionals, because the company did not immortalize its name on the dials, which was quite common, so that the retailer could put his name there. At that time, people did not “buy” the name of the manufacturer, but the local trusted watchmaker!

Crettiez did not have to hide from the well-known Swiss manufacturers with its products. Around 1900, the company had 61 permanent workers and more than 200 home workers. And they had to work hard. At that time, the working hours were 70 hours per week, and work was done seven days a week. Sunday rest was not introduced in France until 1906. Any time off was deducted from the workers’ wages.

The drama of Cluses

Claude Crettiez was a proud and strict patron. To remain competitive, he tried to keep wages as low as possible.

Workers in the watch industry began to organize. From around 1901, the first strikes took place. The unions demanded better working conditions, higher wages and a monthly wage. They also focused on better treatment of women, whose labor was considered secondary. Of course, the unions also hoped that this would bring in a large number of women members to give the union organizations more weight. By 1904, demands continued to rise, but employers, including Crettiez, remained firm on wage demands. Social tensions increased more and more.

In the May 1904 municipal elections, two lists fought each other. On the conservative list was one of Claude Crettiez’s four sons, and on the list of the trade unions and socialists were Crettiez’s workers, among others. The conservative list won the election, but for a man like Claude Crettiez it was an outrageous provocation that his workers had dared to organize themselves into a union and even run against his son. A few days after the election, he dismissed seven of his workers who were active in the union on flimsy reasons.

On May 10, more than thirty workers went on strike to bring about the reinstatement of the seven dismissed workers. They demonstrated loudly in the streets of Cluses. The strike quickly spread to other companies. On May 18, several hundred people demonstrated in front of the Crettiez factory, breaking some windows.

Despite the mayor’s ban on “any assembly or demonstration, and the singing or whistling of songs of any kind”, strikes spread throughout the valley. The workers radicalize and on July 11 a general strike paralyzes work. On July 18, 1904, about 200 demonstrators marched in front of the Crettiez factory. Disaster takes its course: the sons of Claude Crettiez shoot from a window towards the square. Three people die, about 40 are injured. The demonstrators then set fire to the factory.

Claude Crettiez and his four sons are charged with manslaughter at the Annecy jury court, along with six workers accused of looting and damaging property. The verdict comes in November 1904: eight months in prison for the boss and one year for his sons. The workers are acquitted.

Thus Crettiez became a symbol of the failure of social dialogue between employers and workers, although Claude Crettiez himself was of peasant origin.

The factory in Cluses was not rebuilt. Instead, the Crettiez family left Cluses and settled in Sallanches. Claude Crettiez died in Sallanches on May 8, 1912. His youngest son, Marcel, died already in 1908 at the age of 29.

The business activity was discontinued only around the middle of the 20th century. Unfortunately, I could hardly find any further information about the late years of Crettiez.

A letterhead of the French Fabrique d’Horlogerie Paul Etevenard from 1923 notes that this company uses Crettiez movements:

And there is a record of the Maison et atelier d’horlogerie Renaud et Taillard about the movements purchased:

But now let’s look at the movements of Crettiez.

Crettiez made movements with cylinder escapement as well as those with Swiss lever escapement. The chronological classification is quite difficult, the few entries in watch movements finders known to me are from the period 1945 to about 1950, i.e. shortly before the end of the Crettiez company.

In the existing movement finders, the Crettiez movements are only listed with their diameter in French lines (1´´´ = 2,2558 mm), so they have no caliber numbers. For simplicity, I have assigned different type numbers to movements with different constructions. These are not official caliber designations, but arbitrarily chosen. To order the variety of Crettiez movements, I used the following criteria: 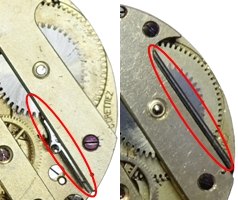 The following parameters do not play a role in the categorization:

By the way, most movements are hallmarked with C. Crettiez, usually on the movement plate next to the mainspring barrel. Some movements, on the other hand, are marked with Breveté S. G. D. G. C. C. Breveté S. G. D. G. stands for a French patent, C. C. for Claude Crettiez. An enquiry at the French patent office INPI revealed that there is indeed one (only) patent by Crettiez. It has the number FR215862, dates from 1891 and is entitled Pièce d’horlogerie dénommée encliquetage d’une seule pièce, s’adaptant à droite ou à gauche aux montres à remontoir ou à clé. In English this means approximately “Watch part described as a one-piece latching device that fits on the right or left side of watches with stem or key winding”. So it’s about the click that prevents the barrel from running back when winding, and here it can be fitted either on the left or right of the barrel bridge. This excerpt from the patent shows this:

This table shows a general overview of the watch movements of Crettiez known to me so far, which are shown in the following (please click to enlarge):

These key-wound movements probably date from the early days of Crettiez, perhaps around 1880.

The type 1a movement shown here has classic Lépine V-bridge shapes, a diameter of 18´´´, a height of 6.6 mm and 10 jewels. I cannot say whether the movement is also available in other sizes. So far, however, I have not been able to find any references to it.

The movement is technically identical to the type 1a, but has no extra cocks for the fourth and third wheel, but a common bridge for center wheel, third wheel and fourth wheel.

The movement comes from this pocket watch: 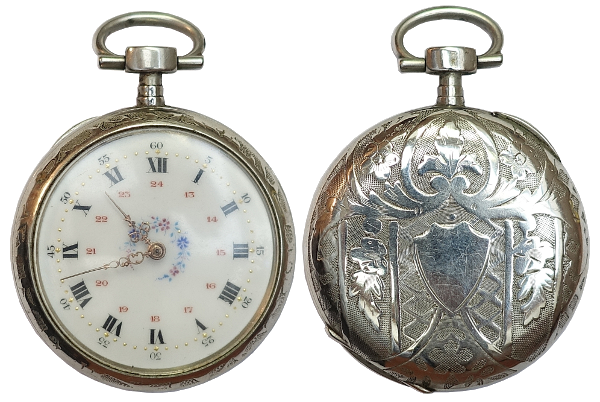 The bridge shape of the movement is somewhat more modern than that of type 1a. The dial with gold minute dots and red numbers from 13 to 24 also suggests that the movement was made from around 1900 onwards. At that time, however, the key winding system had long since gone out of fashion and stem winding with pin setting had long since become standard.

There are numerous variants of this type, all of which have the following in common:

Like type 2a, but setting lever screw right of the crown wheel. Unfortunately, I only have a picture of the bridge side of this movement. It also has 10 jewels and probably a diameter of 18´´´.

As type 2b, but with cover plate for hand setting wheels on the dial side. This movement is illustrated in the French movement catalogue Les Ébauches Françaises from 1947 with a diameter of 17´´´:

Like type 2a, but without second. I only have a picture of the bridge side of this type. This movement here has 10 jewels and is probably much smaller than the movements shown so far, estimated between 10 and 12´´´.

Like type 2f, but click on inner side of the barrel bridge. Here an example of type 2g with a diameter of 11´´´ and 10 jewels:

Like type 2g, but with cover plate for hand setting wheels. This type 2h movement has a diameter of 11´´´ and 10 jewels:

Like type 2g, but setting lever screw left of the crown wheel and only one hand setting wheel. This type 2i movement has a diameter of 12´´´ and 10 jewels:

Like type 2i, but setting lever screw on the right. Unfortunately, I can only show a fragment of this movement:

Like type 2d, but with two setting lever screws left and right of the crown wheel and with a cover plate for hand setting wheels on the dial side. This type 2l movement has a diameter of 18´´´, a height of 6.5 mm and 10 jewels:

Like type 2d, but with a setting lever screw left of the crown wheel and a cover plate for hand setting wheels on the dial side. Moreover this movement has separate bridges for crown wheel and barrel. The next picture shows a type 2m movement with 11´´´ and 10 jewels.

It comes from this ladies’ pocket watch, which has a diameter of only 30 mm: 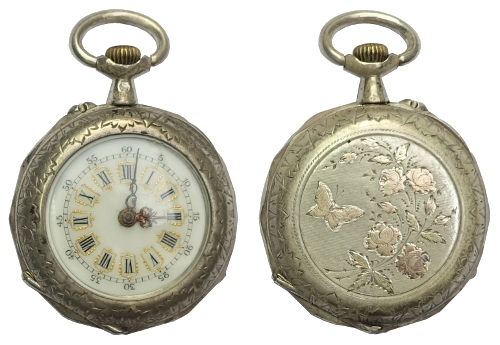 The main difference to type 2 is that type 3 movements have rounder bridge shapes and the fourth wheel is under a common bridge with the third and center wheel.

Like type 3a, but only one hand setting wheel. Unfortunately I don’t have a picture of this movement, but the movement exists.

Like type 3a, but setting lever screw right of the crown wheel and only one hand setting wheel. This type 3c movement has a diameter of 11´´´ and also 10 jewels:

As type 3a, but click on the outer side of the barrel bridge and setting lever screw right of the crown wheel.

As type 3a, but setting lever screw right of the crown wheel. The following 3e type movement has 11´´´ and 10 jewels:

Type 4 is probably the first movement type by Crettiez with a modern Swiss lever escapement and stem winding without pin, i.e. the hands can be adjusted by pulling and turning the crown.

Common features of the type 4 movements:

In the French Cetehor catalogue of 1946, a movement with this bridge side is listed as Crettiez 27/12. Unfortunately, there is no picture of the dial side. Specifications like 27/12 usually refer to the height of a movement in French lines. 27/12 French lines are about 5.1 mm. So a little less than the 5.5 mm of this movement. But movement manufacturers used to be quite generous with size specifications.

Like type 4a, but with a cover plate for hand setting wheels. This type 4b movement has a diameter of 18 1/2´´´, a height of 5.5 mm, 15 jewels and a monometallic screw balance with Breguet hairspring:

This movement is illustrated with both sides in the French catalogue of movements Les Ébauches Françaises of 1947.

Like type 4a, but slightly different shape of the gear train bridge and separate bridges for crown wheel and mainspring barrel (like type 2m). This movement is listed with 19” and a bimetallic screw balance with Breguet hairspring by Ranfft:

This is probably the most modern movement by Crettiez, probably from the 1940s. The bridge shapes as well as the design of the click and the setting lever spring speak for this. Unfortunately, I have not yet been able to find a genuine example of it. Presumably, the movement only exists with a diameter of 10 1/2´´´, as it is a pure wristwatch movement.

If one of my readers owns a type 5 movement, I would be very happy to receive a picture of both sides of the movement!