Skip to content
On 12 March 2020, the time had come: after three years of development, Soprod presented a new movement, the Newton P092 calibre. Here we take a look inside this still relatively new watch movement. Let’s see what surprises it has to offer!

A little bit of history

Soprod, a well-known Swiss manufacturer of mechanical movements, was founded back in 1966. After a chequered history during which the company was sold several times, Soprod has been part of the Festina Group since 2008. Today, the group is able, among other things, to manufacture all the parts of a mechanical movement itself, especially critical components such as balance springs.

Before the Newton P092, Soprod was known to watch lovers mainly for its calibre A10, later called M100. This calibre is compatible with the ETA 2892A2, but was probably never a great commercial success. Although it is built by Soprod, it is based on the Seiko 4L, so it is not a complete in-house development.

So now a new movement, the Newton P092. An in-house development, with the aim of producing a reliable and accurate movement on an industrial scale, i.e. in larger quantities and at acceptable prices. This movement is compatible with the ETA 2824-2, i.e. it fits into cases for the ETA movement, as do dials and hands. Watch manufacturers can therefore easily replace an ETA 2824-2 with a Soprod Newton P092. Since the ETA 2824-2 is much more common than the ETA 2892A2, Soprod has a much larger market at its disposal. Interestingly, Soprod also produces a genuine clone, i.e. replica, of the ETA 2824-2, the P024.

At first glance there is nothing particularly surprising about it – good homestyle food, so to speak. Only the uni-directional winding of the automatic is perhaps a bit unusual. But even the Miyota 9015 only winds on one direction, while the ETA 2824-2 does so on both. A uni-directional winding also doesn’t mean that it’s less efficient than a bi-directional one. So, no need to worry. By the way, the Soprod Newton P092 winds with a clockwise rotation of the rotor, if you look at the rotor from behind.

The two qualities offered, Sophistacted and Top-Flight, are interesting. According to the seller, my specimen is the Top-Flight version. I have not yet been able to find out whether the two versions can be distinguished visually. Whether the movement can keep the promised accuracy, we will see later on the timegrapher.

The most visually striking component of the movement is the balance bridge instead of a balance cock. This is rather rarely found in a movement. It serves the stability of the movement and is of course also quite chic! 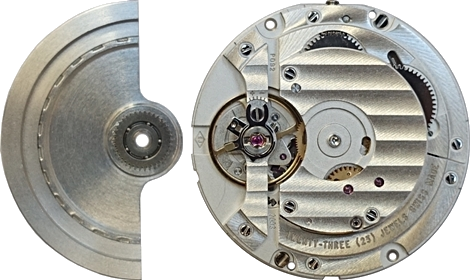 Underneath, the automatic module is revealed, which can be removed as a whole: 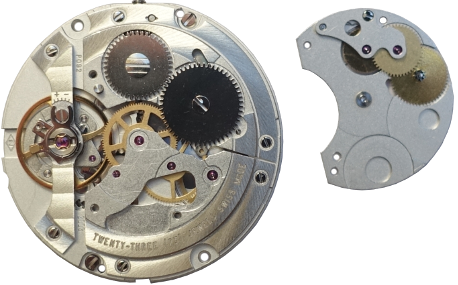 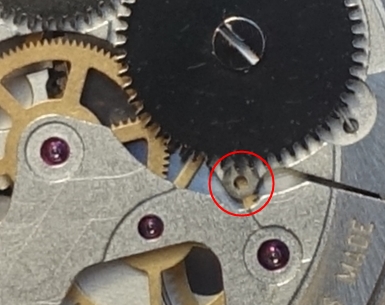 In the next picture, the balance bridge, the crown wheel with crown wheel ring and the ratchet wheel were removed: 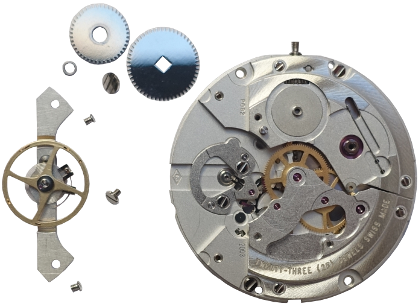 By the way, the crown wheel screw is clearly identified as a left-hand thread by the three screw slots!

The next step is to remove the barrel bridge and the gear train bridge: 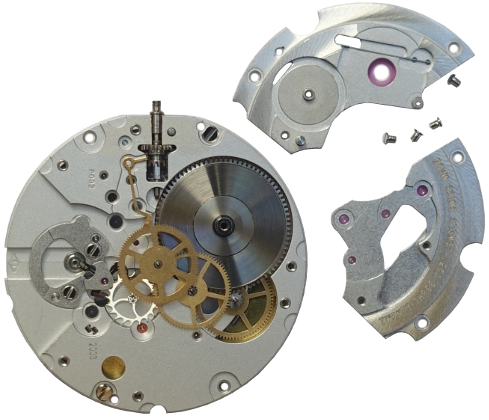 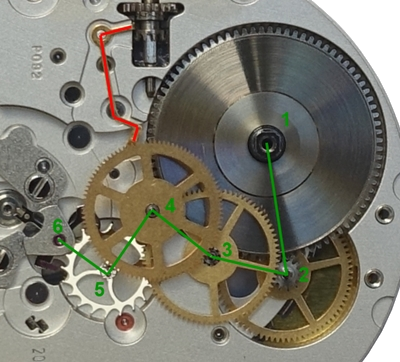 In the picture, the stop lever is marked in red, which presses against the balance rim in the second crown position (setting hands) and thus stops the movement.

Let’s now turn to the dial side: 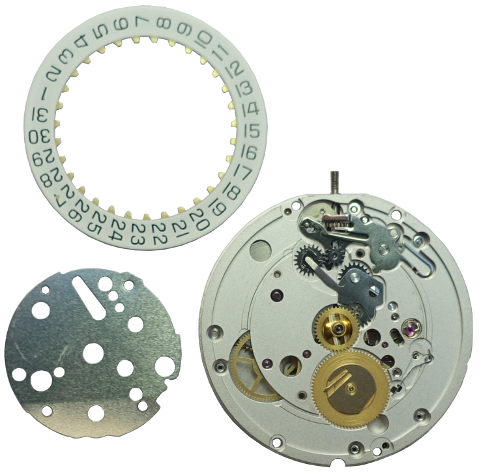 The large wheel at 6 h is the date driving wheel, which advances the date disc by one tooth after every 24 hours. This is how it looks shortly before switching: 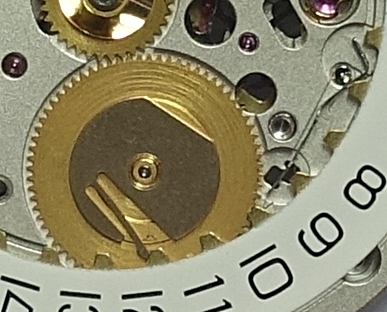 The date jumper can be seen at the top right edge. It fixes the date disc in a defined position after switching, so that the date gets accurately positioned in the date window. The date quick-setting of the middle crown position, on the other hand, is done via this small wheel (date corrector) marked in red: 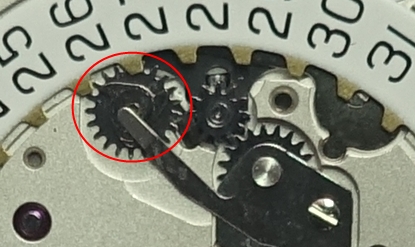 On the next picture, some more parts on the dial side are removed, especially the setting lever spring (top right) and the gold colored hour wheel, to reveal the view one level down: 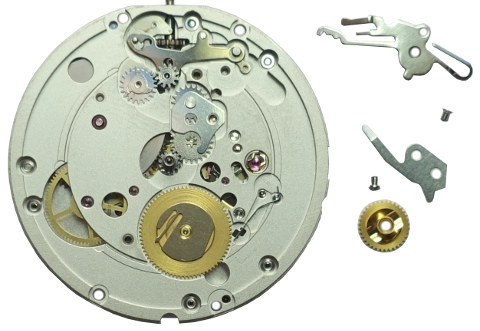 When reassembling the movement, make sure that the setting lever spring presses against the yoke at the point marked here in red: 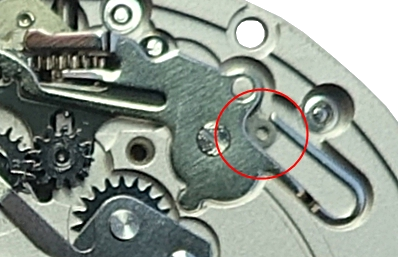 We saw on the bridge side that the movement has no center wheel. So how is the motion works on the dial side driven? On many movements of this construction type, this is done by the large driving wheel, which drives a cannon pinion or intermediate wheel with cannon pinion through an opening on the dial side. On the Soprod Newton P092, the barrel directly drives the cannon pinion in the center of the dial side. For this reason, it has two gear rims:

In fact, this part even consists of two parts that are pressed on each other to form a slipping clutch that allows to decouple the gear train when setting the hands. So, in principle, the lower part corresponds to a classic center wheel and the upper to the classic cannon pinion.

A small addition on the subject of compatibility of the Soprod Newton P092 to the ETA 2824-2: out of curiosity, I checked whether winding stems and date discs of the ETA 2824-2 also fit the P092. The result: unfortunately not!

So much for the dial side. The question remains, whether the movement can fulfill the performance promised by the manufacturer!

So let’s see what the timegrapher says about it! Here is an example in the position dial up: 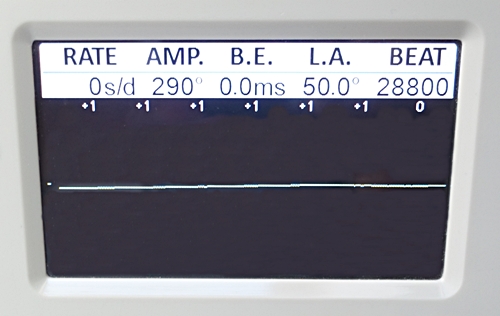 That looks very good already. Here is a table of the measurements in six different positions: 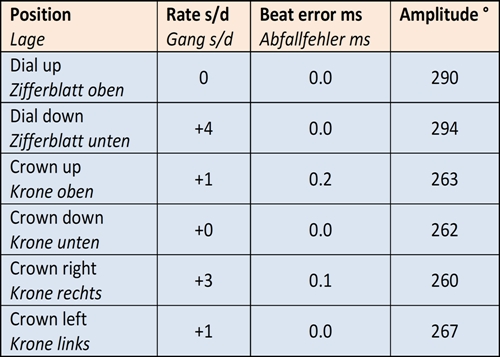 The maximum difference between all positions is +4 seconds per day, the beat error is maximum 0.2 ms and the amplitude is very stable in the lying and hanging positions. The amplitude measurement is based on a lift angle of 50°, but I could not find out the actual lift angle of the Soprod Newton P092.

Chapeau, these values are impressive. If Soprod manages to produce the movement in this quality in larger numbers at an acceptable price, it could be a real success. Which would be desirable!