Skip to content
Catalogs for identifying watch movements exist from about 1930 on. The oldest catalog I know of is from Ebauches SA in 1928. But how can you identify even older movements?

For the well-known major watch manufacturers such as Patek, Longines, Zenith, Omega or Rolex, there is of course a whole range of literature on the respective manufacturer, in which movements are often also illustrated, back to the beginnings of the company. But for not so well known watch manufacturers or pure movement manufacturers, it can get difficult. With a little luck, old movements can also be found in movement identifiers from later times, for example in the Classification Horlogère from 1936, 1939 or 1949, or in the movement guides of Flume, Jakob, Engelkemper or Paulson, to name just a few.

Despite the many movement identifiers, I have accumulated more than 50 movements, which I could not identify until now. But sometimes help comes from unexpected side, in this case from the Schweizerisches Handelsamtsblatt (SHAB) (= Swiss Official Gazette of Commerce, SOGC)!

The SHAB first appeared in 1883 and continues to do so today. It publishes official information and legal announcements of Switzerland five times a week. And it does so in French, German and Italian.

In addition to patents, factory and trade marks, and other information, registered designs and models were also published there from 1889. Number 6 of the first ten entries dealt for the first time with watch movements, unfortunately without illustrations:

The sequential numbering will be useful to us. More about this a little later in this article.

Things get more interesting from August 1900 onwards, as there is an extra section with illustrations of models for pocket watches from that time onwards. The first entry with the number 7490 from 25.08.1900 is from the Val de Joux Watch Co. and shows the following movement:

Such pictures of movements exist in the Swiss Official Gazette of Commerce until 1946, i.e. over a period of 46 years! By the way, the number above the movement has nothing to do with the consecutive registration number. It could be freely assigned by the registering company.

Now, if you have a watch movement that could date from about 1900 to 1950 and that eludes identification via the existing movement identifiers, there is a chance you can find it in the SOGC. But how?

The easiest way to do this is via ETH Zurich’s free online portal, which has digitized and indexed numerous Swiss newspapers and journals:

Using the advanced search, you can limit this to the SOGC and, with a lot of patience and a bit of luck, find suitable images of movements using other search terms. Especially if you already have a suspicion from which manufacturer the movement could come. So the trick is to find suitable terms in the search and to look through a few hundred search results every now and then.

Here is an example (German search form, English is available as well):

These search results can then be sorted by time. By clicking on the respective page number in the right margin, the corresponding pages are displayed:

Among the many registrations are some pretty fancy bridge shapes, such as this one::

But of course, a registration does not necessarily mean that the movements were actually produced that way!

The following are some movements that I was able to identify through the Swiss Official Gazette of Commerce and that are not listed in any movement identifier that I know of. 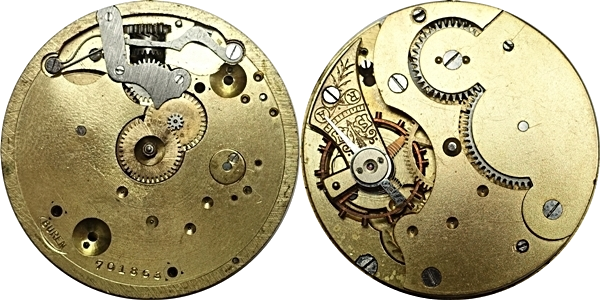 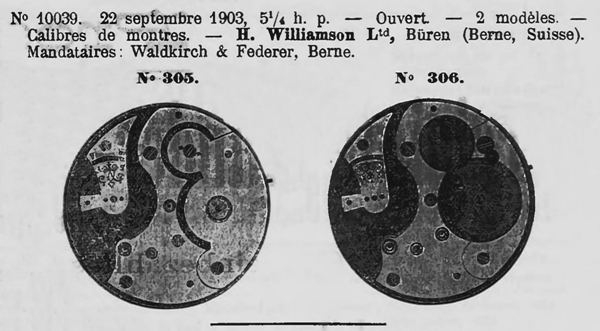 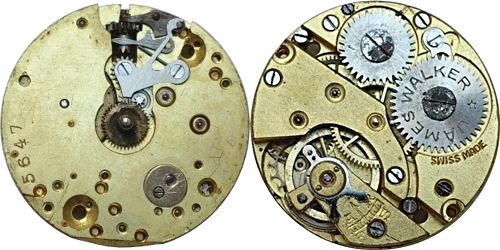 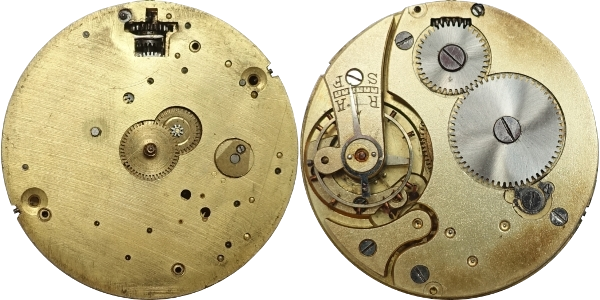 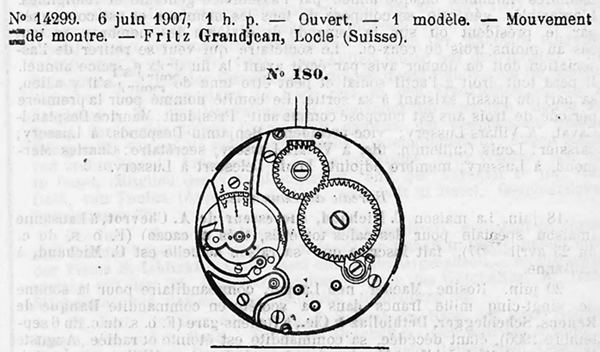 Then there is also the rare case that the registration number was stamped as a caliber number on the movement. With a little luck, the manufacturer can also be identified. And this sometimes even for movements from before 1900, when the registrations had no images! Here are two examples: 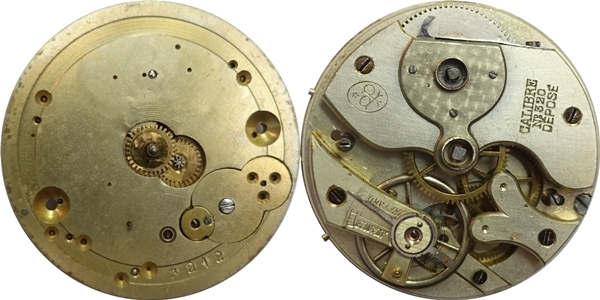 On movement is markes with CALIBRE No. 320 DÉPOSÉ. Déposé means filed or deposited. This is usually a reference to a patent or registered model. The registration with the number 320 from 1892 was made by Pierre Petignat. Unfortunately, it does not contain a picture of the movement! So, why should this movement belong to this registration? The decisive clue is provided by the following logo on the movement:

PP is a perfect match for Pierre Petignat! 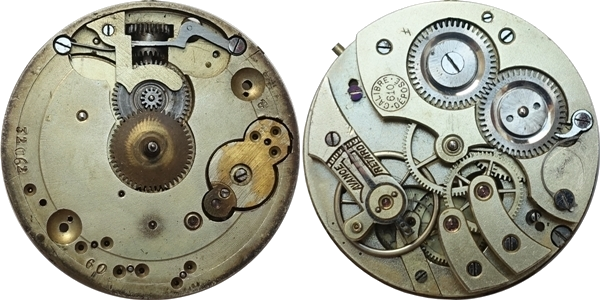 Here, too, there is a corresponding mark on the movement: CALIBRE No. 610 DÉPOSÉ. Unfortunately, the movement does not bear any further information referring to Braunschweig & Hirsch! In this case, the missing piece of the puzzle comes from the case of the corresponding pocket watch. This one contains a logo with the name Eden. And Eden was a brand of Braunschweig and Hirsch. Bull’s eye!

So far, with the help of the Swiss Official Gazette of Commerce, I have been able to identify more than 30 movements that I could not find in any movement finder before. Tiresome, but it’s worth it!