Skip to content
Besançon, capital of Franche-Comté in eastern France, was once the centre of the French watchmaking industry. The first watch manufactory in Besançon was founded as early as 1793 by some watchmakers from Switzerland. Around 1880, 90% of the watches manufactured in France came from Besançon! Between 1883 and 1914, the number of watchmaking companies in the city grew by 105 to a total of 348.

If you are looking for more information on the watchmaking industry in Besançon, you will find it here (French).

On 27.11.1890, the three industrialists Alfred Rannaz, Julien Félix and Irénée Jaillon founded the Société anonyme d’horlogerie de Besançon. Around 40 shareholders endowed the company with a capital of 700,000 French francs, which was a very considerable amount at the time.

The company built a new factory on a site of 11,000 square metres at 25 rue Gambetta in Besançon, and production there started in May 1892. The next picture shows a postcard from around 1900: 25 Rue Gambetta is the large corner house on the right of the picture. In the enlargement of the sign above the door, one can read with a little imagination:

At some point over the years, La Bisontine was added to the company name, as the following postcard from 1898 shows:

By the way, la Bisontine or le Bisontin are the terms for the female or male inhabitants of Besançon!

The inscription on the door sign indicates that the picture dates from a time when the founders had already handed over the company to Gruet and Billiotte. The letterhead from 1906 in the following picture documents this (Successeurs = successors).

Unfortunately, I could not find out why the founders gave up the company. In terms of time, this possibly happened in 1902, at least Gruet and Billiotte founded a joint company in 1902. One of the founders of the Société anonyme d’horlogerie de Besançon, Alfred Rannaz, had already died in 1900.

The section of the image of Rue Gambetta shown above looks like this some 120 years later, so you can definitely recognise the street:

The documents on La Bisontine that can be found online are unfortunately very sparse, so I can only paint a misty picture of the company. So let’s take a look at what other information is available.

As early as 16.05.1893, the Société anonyme d’horlogerie de Besançon registered a sitting dog on a pedestal with the inscription Besançon as a trademark in Germany:

We also find this mark as a hallmark on the movements of La Bisontine, albeit poorly recognisable: 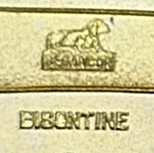 In essence, the patent is about the movement and case forming a single unit. The movement shown in the patent seems to be a pin lever escapement. Overall, however, the picture has no similarities with the movements we will see below! The French patent office has confirmed to me that this is the only patent of this company.

The patent indicates that the company made its own movements early on. This is also confirmed by the document published in 1893 on the occasion of the exhibition celebrating the centenary of watchmaking in Besançon:

Also in 1893, the Association française pour l’avancement des sciences reported that the Société anonyme d’horlogerie de Besançon had more than 200 machine tools, most of which it had developed itself, and 400 employees who had already produced 25,000 watches in the first business year. It also had sales branches in Paris, Brussels and Chicago. The branch in Chigaco probably resulted from its participation in the World’s Columbian Exposition held in Chicago in 1893.

The Société anonyme d’horlogerie de Besançon must have been quite successful in terms of quality. It won a gold medal in the chronometer competition of the Besançon Observatory as early as 1900 and the prize for the five best movements in total in 1902.

The company also won a Grand Prix at the 1900 Paris Exhibition, as the following advertisement from 1905 shows:

In 1905, La Bisontine is thus already definitely in the possession of Gruet and Billiotte. With the 1906 letterhead already shown above, the trace of La Bisontine is lost. In a document available online called TRIBUNAL DE COMMERCE DE BESANCON there is a hint that the company of Gruet and Billiotte existed until 1906. I have not yet been able to find out what happened to it after that.

Now it’s time to finally take a closer look at the movements of La Bisontine!

The first movement comes from this pocket watch with a diameter of 41.5 mm, which probably dates from the early days of La Bisontine, i.e. around 1892: 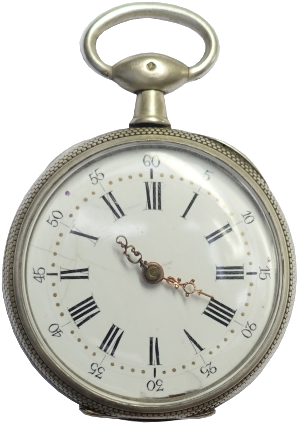 Besides the movement, this pocket watch contains two other interesting details. Firstly, a reference on the inside dust cover to the person who probably sold the watch, namely Poncet Bonnamy À ALAIS. Secondly, a dedication on the inside of the outer cover, which was certainly added after the purchase. Next to the name Frès Augustin, there is a flower, a person and a horse’s head: 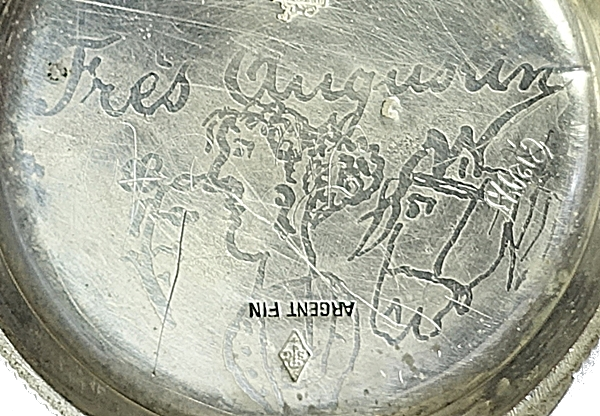 The second movement is in this small ladies’ pocket watch, which has a diameter of only 31 mm. It is probably a few years younger than the first watch shown and dates from around 1900. 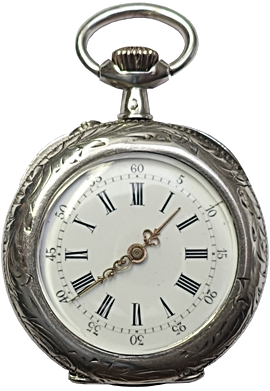 The movement also has a cylinder escapement, but already has a more modern stem winding system with a pin for setting the hands. This movement also has 10 jewels. Its diameter is 12´´´ (27.4 mm), which makes it barely two millimetres larger than a 2 euro coin.

Both pocket watches shown have silver cases made by the Société générale des monteurs de boîtes. The lids of the watches are accordingly hallmarked with SG and a key in a diamond: 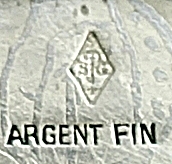 The type 2 movement is also available in a slightly larger version with a diameter of 16´´´ and in the Lépine version, i.e. with a small second at 6 o’clock.

This movement is already pictured at the top of this article. Unfortunately, it arrived to me without a case.

The movement has a diameter of 18 3/4´´´ and a modern Swiss lever escapement with stem winding and pin. It has 15 jewels, a bimetallic screw balance with Breguet hairspring, and a small second hand. The second is in line with the winding stem, so it is a Lépine movement.

There is also a Savonnette version of the type 3 movement, where the small second is at a 90 degree angle to the winding stem. Here with a diameter of 19 3/4´´´ and a lever instead of a pin to set the hands.

And a small movement with only 12´´´ of type 3 is also available for ladies’ watches, here in the Lépine version:

On this small movement, the mainspring barrel even has a Maltese cross stopwork: 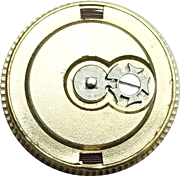 It has a cylinder escapement, 10 jewels and stem winding with pin setting. It has more modern bridge shapes than the movements shown so far, so I would date it around 1905. Although La Bisontine made lever movements earlier, cylinder movements were still in use for ladies’ watches for a long time.

There is also a large version of the the type 4 movement. Here with 18´´´ in the Lépine variant:

The Bisontine movements I have encountered so far have some particular characteristics: 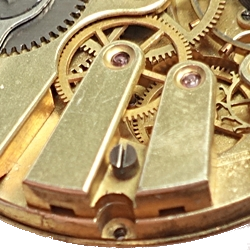 Only types 1 to 3 of the movements shown have these cocks. On type 4, the third wheel is located under the gear train bridge.

Do the movements presented really come from La Bisontine? Doubts arose when I encountered the same movements in some pocket watches made by the Swiss manufacturer Mermod Frères! In some, but not all cases, these movements are of a higher quality than those of La Bisontine. The following picture shows such a movement, which was completed with a bearing jewel for the minute wheel in the centre, a cap jewel for the escape wheel and a swan-neck regulator.

Are we now dealing with French movements in Swiss watches or Swiss movements in French ones? Well, the watch world was quite open between Switzerland and France at the time. In my opinion, however, the following points speak in favour of La Bisontine having made these movements:

Do you know more about La Bisontine, their watches or movements? I would be very happy to hear from you!