Skip to content
Gustav Becker from Freiburg in Silesia, Germany, was a well-known manufacturer of clocks (grandfather clocks, wall clocks, alarm clocks, etc.), but also made a few pocket watches with their own movement. This one is the subject of this article.

A little bit of history

After his training as a watchmaker and working as a journeyman in Frankfurt am Main, La Chaux-de-Fonds, Dresden, Munich, Berlin and Vienna, Gustav Becker opened a watchmaking business in 1847 in Freiburg, Silesia. Today the city is called Świebodzice and belongs to Poland.

Soon he also began to sell not only clocks, but also to manufacture pendulum clocks based on the Viennese model. The company grew steadily and already in 1852 it gained greater fame by winning a gold medal (Medaille d’Or) at the Silesian Industrial Exhibition. Only two years later, the company received major orders from the Royal Post Office and the Silesian Telegraph Office.

The assortment of clocks was steadily expanded and both high-quality movements and cases were manufactured in the company’s own factory. By 1875, more than 100,000 clocks per year were being manufactured, and in 1892 the millionth clock was finally produced.

The company founder died in 1885, and his son continued to run the company. In 1899, ruinous competition among watch manufacturers led to a merger with other companies under the name Vereinigte Freiburger Uhrenfabriken Aktiengesellschaft vormals Gustav Becker. In 1926, this in turn merged with Hamburg-Amerikanische Uhrenfabrik to form a community of interest. Both companies then merged with Junghans in 1930 under the name Uhrenfabriken Gebrüder Junghans AG. In the crisis year of 1932, Junghans finally had to shut down the Freiburg operations, but clocks of the Gustav Becker brand were probably still manufactured until World War II.

Gustav Becker had built up a real empire of clocks in Silesia. Pocket watches were actually not the company’s profession. The founders of the Silesian pocket watch industry were the Eppner brothers, first in Lähn, then in Silberberg. However, they are not the subject of this article.

The oldest reference to Gustav Becker pocket watches can be found on a 1921 emergency banknote of the city of Freiburg in Silesia. In the eagle’s wings, “DAS NEUESTE” (the newest) can be read. Also depicted are a chimney and a pocket watch, both with the Gustav Becker logo. With six factories at the time, as well as numerous civil servants’ and workers’ residences, the company probably had some importance for the city.

Exactly 100 years later, i.e. in 2021, there was a 0 euro souvenir bill from Poland in memory of Gustav Becker. However, this only shows a wall clock, not a pocket watch.

The following movement and pocket watch are shown in the 1925 catalog No. 8 of the Vereinigte Freiburger Uhrenfabriken:

After a long search, I was able to get hold of the following example of a Gustav Becker pocket watch:

It has a diameter of just under 50 mm and bears no brand name on the dial. But the logo of Gustav Becker on the dust cover.

The watch contains a G. B. No. 2 movement, i.e. the version with pallet anchor escapement and seven jewels:

This has a diameter of 43.5 mm or about 19 1/4´´´ (French lines) and a height of 6.4 mm. Especially striking is the shape of the 3/4 plate, which also bears the Becker logo. The monometallic screw balance has got a flat hairspring and oscillates at 18,000 bph (beats per hour). On the dial side, there’s a rocking bar winding mechanism and the click mechanism.

The construction of the movement is quite classic, as the following picture shows: 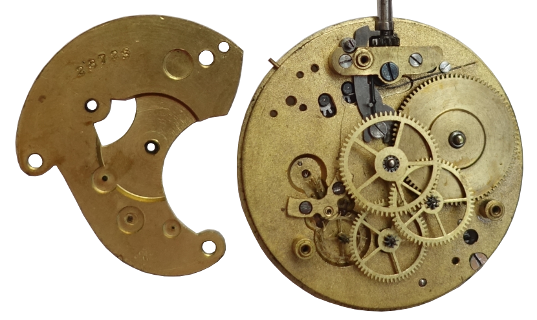 A normal wheel train, where the power flow goes from the mainspring barrel via the minute wheel, the third wheel and the fourth wheel to the escapement wheel. The dark part, which runs to the left of the winding stem almost to the center of the movement, serves to move the rocking bar on the dial side when pulling the crown so that the hands can be set.

Finally, a detail of the escapement: 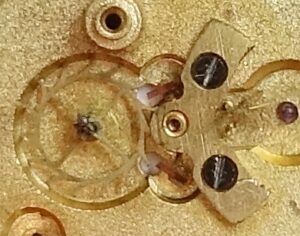 The Gustav Becker pocket watches were probably only produced for a few years and were probably not a great commercial success. Accordingly, they are rare to find today.